When you work with the right people, it’s like magic. 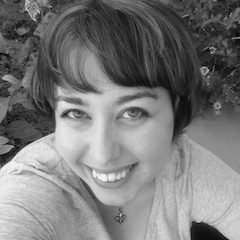 Before Triptych, I was fortunate enough to participate in some other collaborations with our composer, Natalie. We’d joined forces on two projects: a one-act chamber opera and also a composition for spoken-word and flute. Natalie was the one who initially approached me about taking part in what would become Triptych, a sort of collaborative, interdisciplinary blog that a friend of hers wanted to start. That friend is our artist, Candice Broersma. My immediate answer was a big, fat YES because there are some people you should work with at every opportunity available. And those people aren’t just talented—they’re down-to-earth, intelligent, imaginative, and incredibly fun to work with. So if any of you have the chance to collaborate with Natalie or Candice, for heaven’s sake, do it. When you work with them, magic happens.

But onto the collaboration itself and the creation of our first triptych! Since I was the last one to hop aboard the project, I was lucky enough to have two sources of inspiration before I began writing: the works in progress of both Natalie’s composition, “Descendants of Twilight,” and Candice’s illustration. I experienced them both separately, first the music (as that was what had started our “theme” for this triptych), then the visual. Upon listening to Natalie’s composition, what stood out most to me was the mood. There was some sort of narrative there, a past and a present. Something somber, a feeling of seeking, not belonging, and something bittersweet. It filled my mind with images of people living on the outskirts of society, in the wild and on the ruins of cities. But why did they live that way?

When I saw Candice’s illustration, the ritualistic and otherworldly look of its people with their hovering lanterns gave me a whole new surge of inspiration. One of the things that struck me was that each figure was distinct. In my mind, each of these people had their own experience and perspective. But they had come together for a single purpose. But why did they have these lanterns? What were they for?

I put the music back on and began to write, and the story formed itself, answering all those questions. To be frank, I was totally jazzed, and I still don’t think I’ve gotten over it.

It is indescribably rewarding to see all three elements together now—art, music, and writing—as a complete triptych. I’m in love with the concept of its “theme.” Twilight—a transition, an end and a beginning, waning daylight and approaching night, light and darkness. Descendants—carrying on the rituals and traditions of their forebearers, passing the waning torch through time’s encroaching darkness. I feel like elements of this are present in all three works, closely interlinking them. Whereas in the future when our works may contrast each other as they explore different angles of one concept, in this instance our pieces seem to expand upon the same viewpoint. The next triptych is underway, so we’ll see what happens this time! Candice is cooking up a little sneak peek for you on Tuesday, February 2nd…

To our amazing audience, thank you so much for your support, and I hope you’ll continue to journey with us on this project. Please feel free to reach out to us on our Contact page or via Twitter!

One particularly exciting update: we now have a Tumblr! 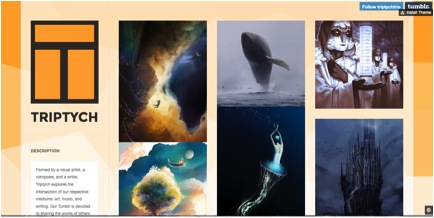 There are millions of talented artists across the ol’ interwebs, and we want to share some of our favorites with you, along with other sources of inspiration. Of course, you’ll find our original works there and some teasers too! Thanks again for following us, and look forward to the next Triptych on February 9! 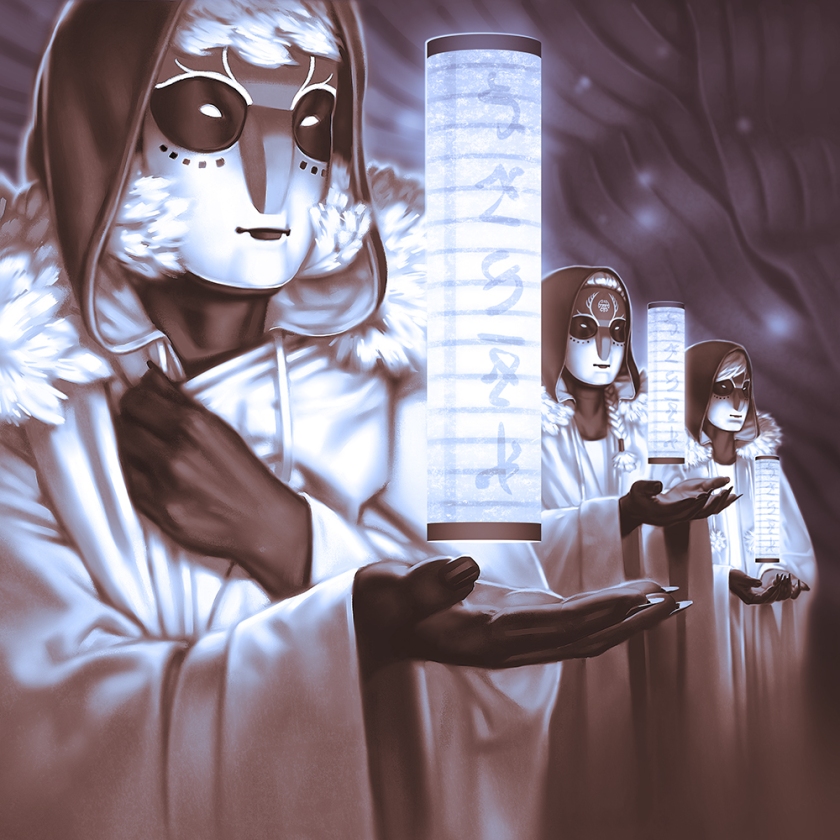 It was time once again to journey.  Hidden in our forest encampment, we could feel it as the day drew to a close.  Our elders gathered at the edge of the clearing as they had for the past seven evenings, noses lifted to the wind.

When they returned to their tents and reemerged cloaked and bearing their lanterns, we knew.

“Come,” I told my daughter, holding out a cloak and a lantern to her.  “It’s time you made your first journey with us.”

She sat huddled away from the wind on a rug with our camp’s other youths and children.  They all looked at her, some silent, some murmuring, eyes wide with admiration.  She stared up at me, hesitant now that the moment had come.  But she rose, took the cloak from me and left the tent without looking back.

We joined the others at the clearing’s edge and set off into the woods.  Crickets chirped slowly in the cold.  Moonlit twigs and pine needles crackled under our feet, and above us there seemed more stars than sky.  My daughter and I followed the elders, but even without them I could have found my way by now, after so many journeys.

Like the elders, now I too could feel the pull toward a civilization faced with destruction.  As though the air itself grew heavier the closer we drew to the doomed land that would need us.

END_OF_DOCUMENT_TOKEN_TO_BE_REPLACED

Welcome to Triptych. Come on in—it’s great to see you! Hopefully you’ve had a chance to look around, and by now you may be wondering exactly what sort of blog this is, what we’re about, and why we exist. Well, we’re transparent here, so check it out!

We’re comprised of a visual artist, a composer, and a writer, and Triptych is our triweekly project that explores the intersection of our three mediums. If you’re interested in learning more about our backgrounds, read more about each of us on the About page.

Every three weeks, we respond to a work initiated by a member of our trio by crafting a piece inspired by the original work’s theme or narrative. At the end, our three creations are presented as one completed mixed-media art piece: a triptych, uniting our three unique disciplines. We’re unrestricted by genre and simply enjoy being inspired by each other’s work. We hope that you will enjoy these creations as well and be encouraged to join collaborative efforts with others who inspire you.

Aside from triptych posts, the trio will explore the phenomenon of collaboration with reflections on our previous projects. In addition, we’ll give you some sneak peeks of upcoming collaborations, present Q&A discussions with our trio, share news about upcoming events, and look at other projects we’ve undertaken in our creative passion (or possible insanity).

We hope you’ll stop by again soon to check out our weekly updates. Starting January 19, 2016, our triptych posts will be published every third Tuesday at 9 AM PST, so circle Triptych Tuesdays on your calendar or sign up for Tweets from @triptychat! (Or both. Both is good.)

Feel free to contact us! We’d love to hear from you, and we pledge to respond to inquiries in as timely a fashion as possible.

Please enjoy our blog, our creations, and all things and people that inspire you!